NZOH_APP (Ohakea Approach) is responsible for all controlled airspace within their designated area of responsibility (see diagram), excluding Palmerston and Ohakea Towers when those units are online. 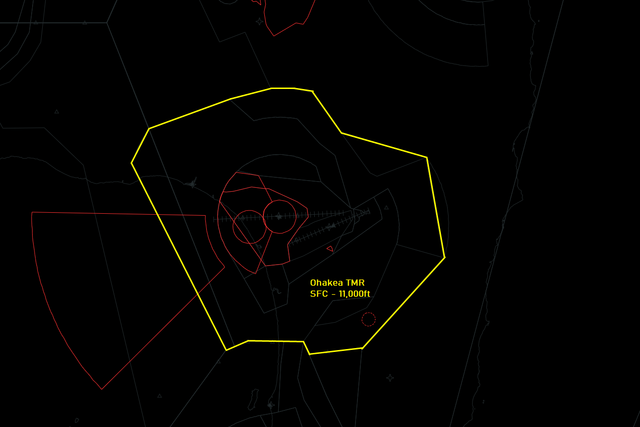 When traffic permits, Approach may 'shortcut' arrivals by tracking them direct to an appropriate base/final waypoint.

Ensure that all aircraft are well above the MSA

All arrivals via 6DME OH 09

In strong wind conditions, aircraft may encounter severe turbulence, downdraughts and lee waves. Winds over the ranges maybe 2 to 3 times stronger than the Palmerston North aerodrome surface wind. On occasions when the reported surface wind at Palmerston North exceeds 15 knots, all suitably equipped aircraft carrying out an approach to RWY 25 are requested to provide ATC with information on wind strength, turbulence and downdraughts encountered in the approach area.

It is a pilot’s responsibility to ensure containment of their flight within controlled airspace when on a visual approach. Caution should be exercised to avoid conflict with possible traffic in class G airspace surrounding Palmerston North CTR/D. This is especially relevant for arrivals from the north and traffic in the vicinity of Feilding aerodrome

Aircraft being vectored downwind for an instrument approach (all RWYs) are to intercept and track via the 15 OH DME arc towards final approach if no downwind extension or base turn instructions are received from ATC.

Pilots are required to advise ATC when joining the DME arc.

To avoid possible noise nuisance to Palmerston North city between 2200 and 0700hrs (local), aircraft should adopt the following noise abatement procedures, except
in adverse conditions or as directed by ATC:

Except in an emergency or when on an authorised instrument approach procedure under IMC conditions, departing and arriving aircraft are to avoid
overflying SANSON TOWNSHIP (R092/1.5 NM OH VOR/DME) and BULLS TOWNSHIP (R325/2NM OH VOR/DME). To meet this requirement when operating from the most critical runways the following specific procedures are to be adhered to:

Ohakea Tower is responsible for all flights within the OH CTR/C, 2,500’ or below.

Ohakea Tower shall request an IFR release from Ohakea for all departures prior to clearing the aircraft for takeoff.

Unless otherwise coordinated, aircraft shall be released on track.

Ohakea shall restrict aircraft on a visual approach to 3,000’ unless otherwise coordinated.

Aircraft on an instrument approach may descend below 3,000’ in accordance with the published profile.

Departures:  Airborne
Arrivals (on an instrument approach): At 10 OH DME, established on a straight-in approach or following a DME Arc approach; or Beacon outbound, commencing an approach from the overhead.
Arrivals (on a visual approach): 10 OH DME.

When Ohakea Tower is offline, the Ohakea Sector or Ohakea Approach is responsible for issuing IFR clearances to departing aircraft.

Palmerston North Tower is responsible for all flights within the PM CTR/D, 1,500’ or below.

Ohakea shall restrict aircraft on a visual approach to 2,000’ unless otherwise coordinated.  Aircraft on an instrument approach may descend below 2,000’ in accordance with the published profile.

When Palmerston North Tower is offline, Ohakea is responsible for issuing IFR clearances to departing aircraft.