What is the difference between IFR and VFR?

It is easier to start with VFR.  VFR is general the set of rules which all light aircraft operate on when flying on a nice sunny day, from aerodrome to aerodrome or via a route e.g. a scenic flight.  On VATSIM, when filing a VFR flight you must include a departure aerodrome and an arrival aerodrome, and in the route field either type in your intentions or file your route.  Since VFR flights operate in VMC (Visual Meteorological Conditions) the route may read something like this: NZAA SkyTower Beachlands NZAA.

Visual Meteorological Conditions (VMC) must be maintained throughout the flight.  This is a little hard to judge in Flight Simulator environment, however, I have attached some tables to help you work out what this minima is. 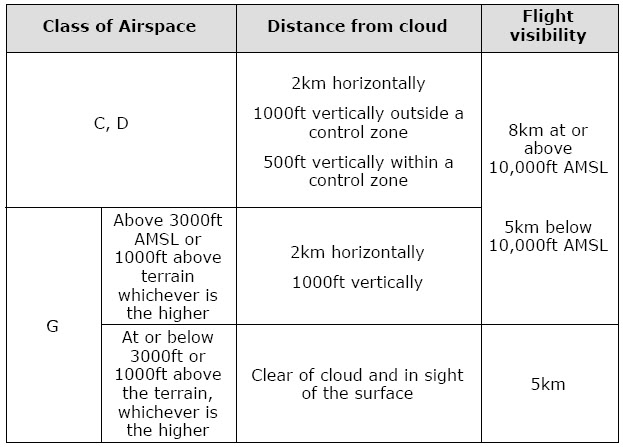 Within Class G Airspace:
Visibility below 3000ft AMSL or 1000ft AGL (which ever is higher), the rule part states you must be clear of cloud and have the surface in sight, and maintain a visibility of 5km.  Visibility over 3000ft AMSL or 1000ft AGL (whichever is higher), the rule part states that the visibility must be at least 5km, and maintain a 2km horizontal and 1000ft vertical separation from any cloud.  Above 10,000ft AMSL, visibility must be 8km.

Aerodrome Minima:  Except for a flight under Special VFR, a pilot is not permitted to take-off or land an aircraft, or fly in vicinity of an aerodrome under VFR when the flight visibility and/or the cloud ceiling is less than the minima prescribed.  When the minima are below this, the aerodrome would be closed to VFR traffic.

Special VFR:  Special VFR is only given when certain minima are present, and can only be issued within an aerodrome control zone (CTR).  This will change the separation rules applicable for a VFR flight from an ATC point of view.  From a pilots point of view, he or she will be permitted to conduct a VFR flight with less flight visibility and/or lower cloud ceiling than under general VFR rules.  Special VFR allows the pilot of an aircraft to perform a VFR operation within controlled airspace in weather conditions below those normally prescribed, provided the operation is performed:

Within Class C and D airspace, any SVFR flight must be separated from IFR (unlike standard VFR flights which do not need separation from each other).  In summary, within controlled airspace in New Zealand, SVFR aircraft must be sepratated from IFR and other SVFR.  ATC can only issue SVFR if conditions are better than prescribed minima (at least 600ft ceiling and at least 1500m visibility).

IFR (Instrument Flight Rules) is a set of rules to allow aircraft to operate in Instrument Meteorological Conditions (IMC).  These rules contain a specific criteria for most elements of the flight, for example, it details the minimum instruments required to be fitted to your aircraft in order to enter IMC.  On VATSIM, most people conduct flights IFR from aerodrome to aerodrome.  Some users fly jets with sophisticated flight management computers and automatic pilot systems, whereas some pilots may fly a small Cessna IFR over a much shorter route.  Irrespective of the size of aircraft there are some general operating rules which we will cover.

Instrument Meteorological Conditions (IMC) refers to the weather conditions under which IFR flight is permitted.  When a flight commences on VATSIM as an IFR flight, it will generally stay an IFR flight under it's destination, whether it enters cloud or poor visibility or not!  Flights are conducted IFR everyday even on the sunniest of days.  IFR does allow the flights to operate in IMC - that is, in cloud or conditions of poor visibility (less than those minima described above).

IFR Departure Minima:Sometimes the weather conditions may be so poor that even IFR flights may not depart an aerodrome.  This is called take-off minima and is published on the aerodrome chart and all aerodromes in New Zealand designed to handle IFR traffic.  If no minima is published, a general minima of 300ft ceiling and 1500m visibility applies.  If it is worse than that, then you may not depart!

The above minima shows that IFR Take-off is available on Runway 14/32 by Day only, when the cloud ceiling is not below 1200ft and the visibility is not less than 5km.

Depending on the aircraft's instrument capability (Cat 1,2 or 3) will determine the minima (or the lowest altitude) to which the aircraft is permitted to fly down to on an instrument approach.  Below are a few examples from New Zealand approach charts which show the different minima available.

For an aircraft Category 1 (just basic IFR capability), under all sized/speed categories (a,b,c,d) the lowest an aircraft may fly this ILS approach is 215ft AMSL (200ft AGL) and at that point the aircraft must have at least 800meters visibility (or have the runway RVR reported as at least 550m).  If you go down one line you can see that this minima increases if the runway lights are not working (LIH ALS U/S).  If the glideslope has failed but the localizer is still operating, then the minima changes again (LOC/DME).  If the aircraft intends to circle off the approach (circling for the other runway or perhaps for IFR training) then the minima differs depending on the size category of the aircraft.

What should I fly?

Depending on your skill level and knowledge you can choose either one.  If you feel like going for a scenic flight around Lake Taupo, you most likely would file to fly VFR.  If you are flying from Christchurch to Auckland in an Airbus A320, then you will file your flight plan as IFR.  Enjoy your flight on the VATSIM network, within VATNZ airspace.  If you have any comments or questions please get on the VATNZ Forums and ask away.  All of our staff and members are knowledgable and will be able to provide the information you require.