Of course flying an ILS is easy as all that is required is to tune it and select APP on the FD/AP panel and follow the commands or watch the AP do it and, if your aircraft is capable of it, sit back and watch it autoland.

For those interested I thought that I would share my knowledge of conducting RW (Real world) non-precision approaches and hopefully add a little more realism into the virtual flight ops world.

The term Non- precision approach has now given way to the new term “Non-ILS approach”. As the term implies Non-ILS means any approach other than an ILS. This includes LOC, VOR, NDB, GPS, GNSS and RNAV.

An ILS system essentially consists of a ground based localiser located on the extended centreline of the runway for tracking guidance, a glide-slope that is radiated from an antenna located adjacent to the touchdown area and a series of marker beacons, or more commonly a co-located DME, for range information. With a Non ILS approach the pilot uses a less precise navigation aid for tracking (NDB, VOR or GPS) and additionally is responsible for calculating and maintaining his own glide-slope path in order to conform to the various minimum altitude requirements of the approach.

Because the descent path on the approach is determined and monitored by the pilot(s) it can vary considerably and aviation history books are littered with accidents as a result of miscalculation, error and poorly executed approaches.

In earlier days Non precision approaches were flown in a very different fashion than they are today. An approach would consist of a series of points along the approach at which the aircraft had to pass over at not less than the charted altitude.

Essentially a pilot would pass one point and then descend down quickly to the next altitude and level out until passing that point and so on.

Eventually the pilot would descend down quickly to the minimum descent altitude for the approach in an attempt to acquire the required approach visibility. This resulted in a series of step downs with level portions in between. This was fine for slower moving aircraft but when jets attempted the same it led to destabilised approaches and together with slow spool up time (accelerating) engines led to many accidents or trouser staining go-arounds as the engines slowly and painfully powered up.

The accepted method for jet aircraft flying Non-ILS approaches today is to fly them using a constant descent path and therefore rate of descent. This is referred to as a stable approach. They also have the advantage of fitting in better with noise abatement procedures. Many airports now require that STAR’s an approaches are flown with a constant descent.

For the purposes of this guide we will look at an aircraft arriving from Taupo for the VOR/DME RWY 16 approach into Napier via the DME arc. We will look at the non FMC and FMC equipped methods of flying the approach.

This guide assumes you have an understanding of VOR tracking and basic IFR procedures.

There are 2 useful sites to help assist you in this area:

The published approach chart with the AP to NR track depicted in red: 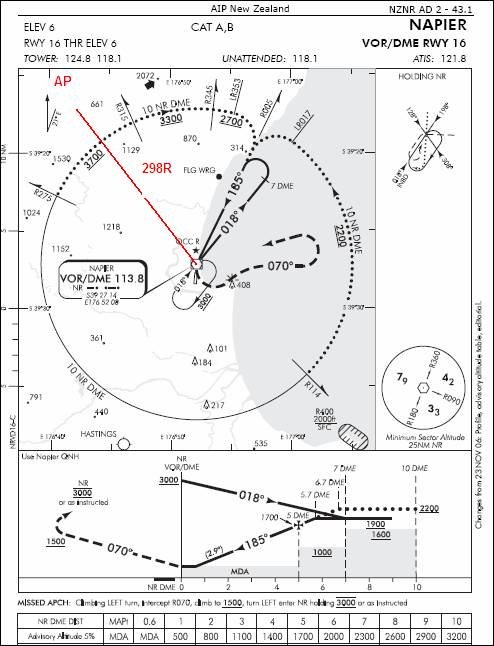 Looking at our enroute navigation chart we can see that we will fly along the H211 airway from Taupo to Napier and that the required track is 118 degrees and as we get closer to Napier we will be tracking inbound via the NR VOR 298 radial.

If we now look at the Napier VOR/DME RWY 16 chart we can see that the NR 298 radial will put us on the arc segment between the NR275 radial and NR315 radial. Also note that it is a 10 mile arc (10 nm radius based on the co-sited NR VOR/DME and that we need to turn left to arc clockwise. Once we are on the arc we can descend to not below 3700 ft.